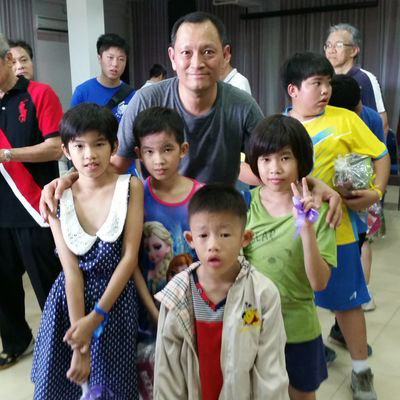 Desmond Leong typically would take ten-days’ worth of leave every Chinese New Year. Out of those days, he would usually just spend two, or maximum three, days visiting his family. He often wondered what he could do to spend the rest of his leave days, what with his logistics company and most of his favourite hangout spots closed for the festivities.

But hospitals are never closed. On one of his leave days in 2012, Desmond walked into Hospital Sultan Ismail (HSI) and signed up as a volunteer at the paediatric palliative care ward. To him, this was the first small step to giving something back, and he was quickly tasked to handle a simple but responsible task: listening to the patients and their caregivers.

Through his exchanges, he found that caregivers are physically tired. Since he gained this understanding, he has reached out to help caregivers with requests of organising birthday parties, shopping for groceries and sometimes just offering them to take a day off to rest. After months of working with them and gaining their friendship and trust, Desmond found a larger underlying problem: poverty. Medical expenses take a toll on patients and caregivers, and Desmond realised that they needed financial help more than anything. He rallied for contributions from his friends and business acquaintances and managed to help whoever needed the money.

Later, a doctor encouraged Desmond to work with a registered platform so it would be easier for administrative purposes, which is when he signed up with the Palliative Care Association. Every Friday, he would accompany two nurses and one doctor during their house visits to patients. He helped in whichever way he could, even driving the healthcare team when they were unfamiliar with the area. Through helping the nurses, he understood the physical strength nurses require, as medical equipment is not light to carry. He also saw their dedication.

While working to alleviate their financial difficulties, Desmond feels deep sadness whenever he watches or hears of a patient’s passing. Desmond’s wife would often notice him being sad for a few days, but the sadness is what keeps him going. Despite the unfortunate side of the story, he wants to keep giving the best to patients who are suffering. He also joined the Children’s Wish Society, an NGO fulfilling the wishes of terminally ill children. His first task was to fulfill the wishes of an 11-year-old boy with muscular dystrophy who wanted to visit Universal Studios in Singapore. The boy’s wish was fulfilled.

Desmond eventually sold off his logistics company in 2017, which he ran for 17 years. People around him initially questioned his decision to become a full-time social worker, but he claims to have found inner peace through helping others. To Desmond, if there is a will to help, there will be a way to work through it. He tells others not to worry too much about receiving finances to help others – he believes that there are many good people who can’t spend their time volunteering but are always more than willing to donate to a cause.