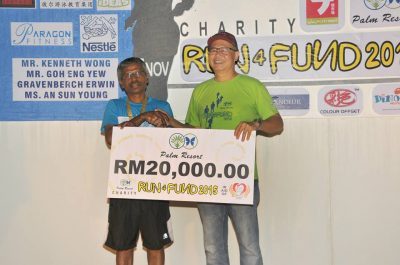 One would typically consider a life of relaxation in their 60s, staying away from all activities that involved hard work and high energy. But not Dr. Angamuthu Rajoo, a plastic surgeon who, instead of spending his golden years relaxing and enjoying, chose to embark on a journey not many would even consider going on.

In 2015, Dr. Anga, then 61, along with two others travelled by foot from Sibu to Kuching to raise funds for a programme called “End Polio Walk” for the Rotary Foundation. They trekked on the main road from midnight to noon to avoid the heat and traffic, eating from the local food stalls and sleeping at budget hotels to stay frugal. To ensure their safety, a vehicle followed them throughout the eleven days of walking, during which they covered a total of 476 km. Whenever they decided to stop to rest, the vehicle picked them up and sent them to their hotel. The next day, the vehicle would send them back to exactly where they stopped to continue their walk. Once, when Dr. Anga walked too far ahead, he was stopped by locals. There was a recent case of robbery in the area he had passed, and he was questioned as they thought he was the robber they were looking for. He pointed to his End Polio Walk t-shirt, and soon the vehicle and his peers caught up with him to verify what he said. He was let go.

“It was a fantastic experience! I would do it again,” said Dr. Anga. They all experienced blisters on their toes, which they gauzed during their rest, then continued walking. Their determination to raise money kept them going.

Dr. Anga is also involved with many NGOs. Through the Rotary Club of Johor Bahru and his expertise as a plastic surgeon, he has carried out fifteen missions in the Philippines to operate on cleft lip and palate patients, as well as post-burn contractures. A total of 360 procedures have been done on 260 patients during his missions. At the Education, Welfare & Research Foundation (EWRF), he has delegated many educational projects for the poor and underprivileged Indian students. He has also been the President of the Palliative Care Association of Johor Bahru (PCAJB) since its inception in 2007, caring for the terminally-ill cancer patients. PCAJB sees up to 400 patients yearly, and has three full-time staff nurses and a manager.

Dr. Anga had humble beginnings, growing up in the rubber estate. Having witnessed hardships at a young age, he naturally empathises with the less fortunate and goes out of his way to help them.

Being a practicing surgeon means he has to be able to juggle his time well. Sometimes, he takes time off work to carry out voluntary work, or he helps out with those who need him over the weekend. He is thankful that the people around him are understanding, helpful, and donate towards the cause. That’s what being a hero in our community is all about: benefiting the lives of others through skills and knowledge.