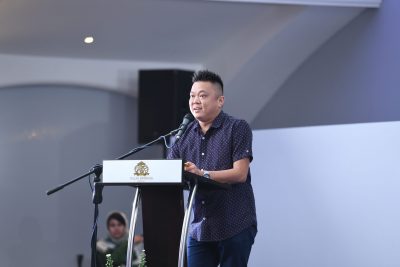 Jeffery Wong loves animals, so much so that he is a vegetarian. But that’s not all he does to prove his love. Jeffery is Johor’s very own wildlife activist and has been nursing and relocating wild animals since he was a young boy. Taking after his father who is a strong advocate of wildlife protection, Jeffery is often contacted by people on social media or by the authorities like the fire department to help release reptiles and the likes back to where they belong.

“I do it not because of recognition. I do it for the animals. Normally, people help domesticated animals like cats and dogs. Not snakes, turtles, monitor lizards and so on. I love animals very much. Especially wild animals, they have their own beauty. Someone needs to help them,” said Jeffery.

He often deals with reptiles such as pythons and monitor lizards, but will also help other animals including tortoises, birds and monkeys. These animals will be nursed back to health before being released into the jungles of Kota Tinggi. In some cases, Jeffery will receive news about animals confiscated by the authorities such as eagles and pangolins. These animals are illegally reared by humans. In many instances, he has paid for the treatment for these animals out of his own pocket.

“I want to do a lot, but I need resources. That is why I believe that I need to be successful to keep helping these animals and widen the type of help I can provide,” added Jeffery.

He laments that with urbanisation getting closer and closer to forests and jungles, more animals will be displaced, and we need to start thinking of a proper and sustainable solution to preserve Johor’s natural wildlife for the future generation.

“A reticulated python or a squirrel may be common now, but at the rate, we are going, will our children be able to see them in the next 40 or even 20 years? I feel that with every animal I help, there is a small chance that the future generation will be able to enjoy the beauty and wonders of these exotic creatures,” said Jeffery.