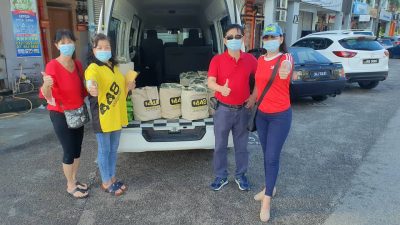 The number 448 refers to 4 hours a month and 48 hours a year – the minimum number of hours one should spend helping other people, according to 448 Foodbank.

What began as a humble food bank distribution to just five families, 448 Foodbank has grown from a group of eight friends to a network of 500 volunteers helping 300 families – all within three years. It began in 2015 when founder Eric Lim was trying to figure out the root cause of robberies in his community. It occurred to him that nobody would resort to a path of crimes unless they are desperate. He saw a social problem that needed to be addressed, and he was wielded with an “I have to do something” attitude to solve this issue.

Inspired by ride-sharing app Uber that operates without owning any vehicles, founder Eric knew that he could set out and make a difference without assets and big financial capabilities. 448 Foodbank started by receiving commodities from the excess stock from an orphanage in Klang, storing them in a small storeroom at a community centre. They distributed these rations to five families they found out about through word-of-mouth. When the number of families increased, Eric reached out to his circle of friends on Facebook for donations, who then shared his initiative around. Everyone came out to help each other regardless of race or language.

Eric believes it is important to recruit younger volunteers to break a cycle of self-centeredness among our future leaders. Younger volunteers, with priorities on growing their career or family, usually put volunteering aside with “no time” as an excuse. Thus, the minimum four hours a month commitment was introduced to prove that a little effort can go a long way. The strength of a community lies in the contribution and participation of each member. To Eric, everybody must be aware of what goes on in their community. As part of their food distribution programme, 448 Foodbank aims to increase public awareness of social responsibility. Volunteers are encouraged to take their family members along during distributions to witness the lives of the less privileged.

Recipient families are assessed and evaluated according to Foodbank 448’s urgent-needs criteria and are then put on a six-month food bank programme. In the six months, the volunteers, who go through L1 and L2 training, give the families the support and motivation they need to get back on track; to have the families see that their community cares for them, that they are not alone.

448 Foodbank plans to expand as a logistics centre to support other organisations in distributing food to those in need. A challenge they currently face is in their commodity resources – sometimes they have to pool their own monies, use their emergency fund, or ask the public for more donations. They currently have a CSR Food Adoption Programme for companies to commit to donating foods.

“Helping others is not going the same as going to the Moon – it’s not difficult,” said Eric.