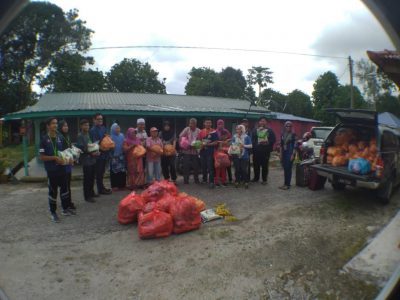 Walking on the pristine sand, listening to the sound of gentle waves as you enjoy the breeze against your skin. Did that remind you of the beach? We envision finding such beautiful beaches only in far and exotic places like Boracay, Bali, and Kauai. Our local Malaysian beaches are often synonyms with trash and polluted waters – hardly one’s dream romantic getaway.

And this is what Bestari Beach Malaysia Charity Squad, a wing under Sahabat Johor Darul Takzim, wants to change. The squad is optimistic about making clean local beaches a reality. They have been cleaning beaches since 2016, organising beach clean-ups twice a month.

It all began when founder Mohd Fairuz aka Aaduka was at a beach in Pontian hoping to wind down and relax. Instead, he observed a polluted beach and wished he could do something about it. Instead of just stopping at that thought, he went out to buy cleaning equipment – masks, gloves and black plastic bags. That evening, he cleaned the beach alone and was even mistaken for a waste management worker, but it was then that he realised he should involve others too. Aaduka’s determination to clean up the beaches later inspired his friends to do so as well.

Members of the group rely on information from research and the public on the state of different beaches via social media. They hope more people will follow suit in protecting the environment from impurities that may harbour diseases and viruses infecting humans. To achieve this, they work with district schools and collaborate with NGOs to increase awareness. Recreational areas with beaches that are not well-managed nor maintained are usually where they go for the cleanup. During the clean-ups, they discover a lot of interesting things about nature, an educational experience Aaduka believes can be developed by grassroots leaders.

“A clean beach is not only a sight for the eyes, but it is also a way to improve the economy of the local community,” said Aaduka. He believes local authorities should play their part by putting up new informative signboards and providing garbage bins at recreational areas. He also thinks that authorities should implement environmental protection laws.

Other than cleaning up beaches, they also organise volunteering events and recreational activities such as hiking. Environmental preservation is important and this club is doing a great deed for everyone’s greater good.