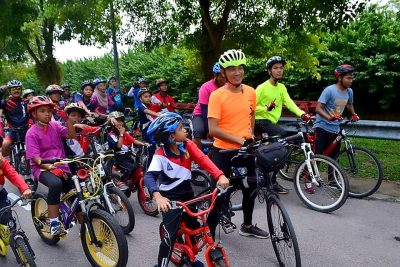 Stephen Ngu’s wife and son were returning home from a normal night out. Just as she parked the car into the porch, the car windows were smashed into, and two men yanked her handbag and ran off. Their neighbours watched on from their balconies shocked and in horror, yet nobody called the police. The incident left Stephen’s wife with a slash on her arm while his son was traumatised. Stephen, who was not home at the time of the incident, took it upon himself to address safety concerns in his neighbourhood and educate his neighbours on actions they should take when crimes occur again.

Stephen worked closely with the police and a group of volunteers to start a cycling group as a form of neighbourhood night watch. For their safety, they follow the police’s instructions by reporting suspicions or incidents instead of taking matters in their own hands. Neighbours are told to keep the local police station’s number on speed dial.

In the same light of keeping things safe, Stephen also promotes safe riding. He noticed the lack of awareness surrounding safety in riding, especially with younger cyclists who do not know traffic rules.

“It’s not their fault they do not know the rules. It’s because nobody taught them. That’s where we come in,” said Stephen, who founded Happy Riders Connect, a volunteer group promoting recreational community cycling for all age groups.

They also encourage communities to take part in crime prevention cycling rounds in their own neighbourhood, led by experienced marshals. Stephen is strict with safety and anybody who rides with him must wear a helmet.

Cyclists are reminded of traffic rules and taught about proper bicycle handling and safety. Happy Riders Connect is an all-inclusive cycling community. “We welcome everyone with any type of bicycle,” Stephen says. They have to oblige to a unique safety code when cycling on the road: 1-2-U. 1 is to stay in single file, 2 to keep a distance of 2 bicycles, and U for “undang-undang”; to obey laws of the road.

Stephen, who is a software developer by day, said he chose cycling because it is the most practical sport to do, having lost 20 kg himself since he started in 2009. To promote a healthy and green lifestyle, he cycles for 45 minutes three to four times a week covering a distance of 15 to 20 km per ride. He keeps a foldable bicycle in his car, and often chooses to park his car further away from busy towns and then cycle to his destination instead.

Stephen is a father to a 15-year-old triathlete and understands how parents fear for their child’s safety on the road. To address issues of kids cycling dangerously, he visits neighbourhoods, meets the children, and teaches them about safe cycling. “Children enjoy cycling and we shouldn’t stop them from doing what they like. What we should do instead is educate them on the right and safe techniques.” Part of this education includes teaching children better vocabulary, and to do so, the volunteers of Happy Riders Connect read English books to village children.

“Imagine if they understood English, they can read signboards, and the world would be unlocked for them,” Stephen reasons.

SK Taman Jaya Masai is one of Stephen’s success stories. He encourages parents to be carbon and fuel-efficient by not sending their children to school by car or motorbike in the mornings; instead, they can cycle. In the beginning, the school had 276 cyclists who cycled to school without helmets and with bicycles without brakes. Since Stephen and his team swooped in to educate them, they now have over 300 cyclists with safety apparatus.

“As members of the community, we need to keep a lookout for one another.”