Discovering the Making of IMSHA

For six consecutive years since 2014, the Iskandar Malaysia Social Heroes Awards (IMSHA) have been identifying and recognizing the social heroes in our community. The objective of IMSHA was to “Spot, Recognise and Empower” social workers who carry on their work valiantly, serving voluntarily and unconditionally.Very often, the contributions of social workers go unnoticed because they preferred to serve with anonymity. Now the social heroes in Iskandar Malaysia who have been doing their work quietly over the years, are being identified and honoured with the IMSHA recognition which will be publicly presented to them in a grand awards ceremony graced by VIPs, corporations and fellow social workers.

At the IMSHA Night, these humble social workers have the privilege to shine among their peers and enjoy being appreciated for their selfless contributions – and have fun being dressed up smartly – for just one night in the year. Organized by The Iskandarian, the official newspapers of Iskandar Malaysia, in collaboration with Iskandar Regional Development Authority (IRDA), SIRIM Berhad and other sponsors and partners, IMSHA has established itself as a prestigious annual awards event.

Between 2014 and 2019, IMSHA received 1410 nominations of Civil Society Organisations (CSO), Non-Governmental Organisations (NGO) and Non-Governmental Individuals (NGI) who are doing social good in the Iskandar Malaysia region. From among these hardworking nominees, 60 NGOs and 60 NGIs have been acknowledged as winners at the annual IMSHA.

For IMSHA 2014, only 173 nominations were received. Every year the number of nominees gradually increased and in 2019 there were 301 nominations.This rising number of nominees is proof that the spirit of volunteerism is very much alive in Johor. I remember attending the inaugural IMSHA in September 2014 held at Le Grandeur Palm Resort, in a glittering affair graced by the fifth Prime Minister of Malaysia, Tun Abdullah Ahmad Badawi (2003 – 2009), who was Patron of IMSHA for 2014 and 2015. 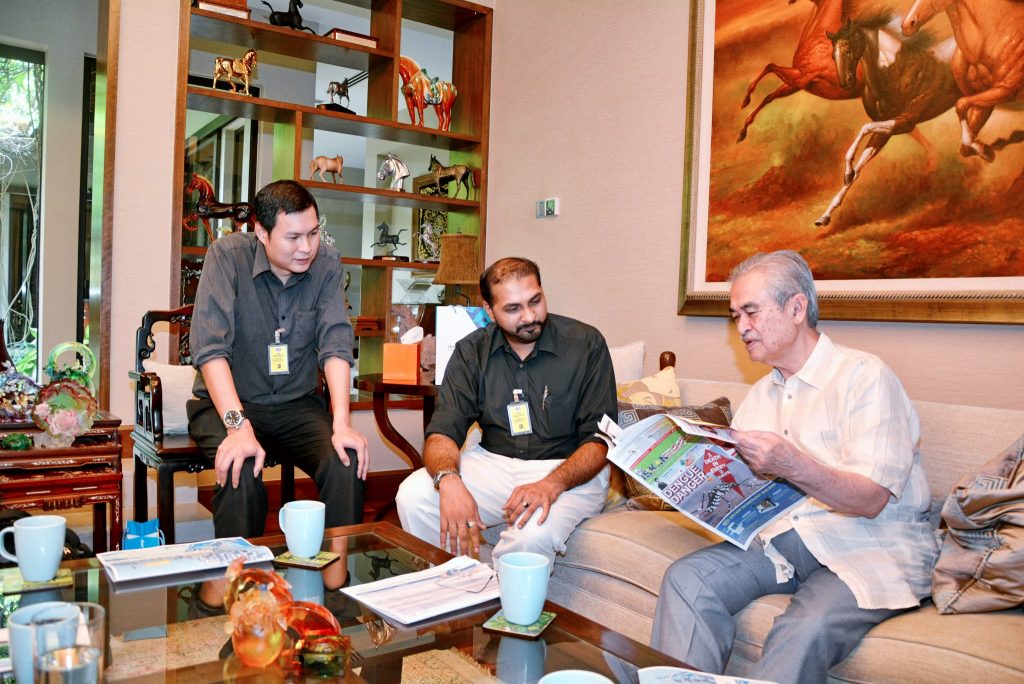 Meanwhile Edey Suresh, Editor-in-Chief of The Iskandarian had shared with me about their visit with Tun Abdullah when they went to invite him to be the IMSHA Patron and for him to grace the IMSHA event, planned to be held in Johor Baru. In addition to presenting Tun Abdullah with the Malaysian traditional buah tangan, they also brought along copies of The Iskandarian newspapers to introduce Iskandar Malaysia’s official newspaper to him. Edey said that as Tun Abdullah turned the pages to review the newspaper, he paused significantly longer at Page 10* to admire this page printed with My Johor Stories! IMSHA thought that it was appropriate for Tun Abdullah to be its Patron as he was a Board Member of the South Johor Economic Region, a major Federal infrastructure project in Johor under the Ninth Malaysia Plan.The South Johor Economic Region which started in 2006, was also known as the Iskandar Development Region before being renamed, Iskandar Malaysia.

In the inaugural IMSHA, awards were presented in 11 categories from which 22 winners were drawn – 10 for Individuals and 12 for Organisations.In addition to the 22 winners who were recognised for their selfless contributions, the Johor Area Rehabilitation Organisation (JARO) was honoured as the recipient of the prestigious Tun Abdullah Ahmad Badawi Iskandar Malaysia Ultimate Social Hero Award.

I was thrilled that JARO was recognised for their many years of training and employing the disabled and helping to give these artisans dignity in their lives. When I congratulated Datin Patricia Lim, who received the award on behalf of JARO, she told me that JARO shared the award with me because my regular coverage of JARO activities had helped to raise its profile in the community. Her spontaneous acknowledgement was indeed a pleasant surprise as I never thought that my work played such a significant role.

Since the inaugural IMSHA in 2014, I had the privilege to attend each subsequent IMSHA Night to witness how Iskandar Malaysia’s unsung heroes each took their turns to proudly receive due recognition.

Speaking of unsung heroes, I had featured the work of several NGOs who happened to be IMSHA winners, in an exclusive story, A tribute to our unsung heroes in my 2017 bestseller, My Johor Stories: True Tales, Real People, Rich Heritage.

So in Book Three of My Johor Stories, I thought it was apt for the IMSHA story to be featured under the section Proudly Johorean, along with other brands that were proudly established in Johor and developed into household names.

I know that the IMSHA was the brainchild of Johoreans, supported by Johor agencies and corporations, that had developed into a coveted award in Iskandar Malaysia. And to discover more details on the birth of IMSHA, I needed to speak to those who were involved since its inception.

Most NGOs are familiar with Past President of NGO, Johor Women’s League (JEWEL), Thanam Visvanathan-Suresh, who is Chairman of IMSHA, but very few may be aware that the founders of IMSHA were in fact, two young men. In line with the spirit of volunteerism and working with anonymity, these young men decided to work behind the scenes while Chairman Thanam became the face of IMSHA.So it was my privilege to hear from Thanam and Edey, all the interesting details and exciting anecdotes as they walked me down the proverbial Memory Lane to recall how the idea was hatched for the birth of IMSHA, up to now when it is recognised as a quality annual award which is backed by a strict selection, governance and judging criteria.

It was amusing to learn that while Edey initially thought that the IMSHA event could be held over a simple High Tea, Thanam was aware that the awards event would be a grand affair, one that should properly celebrate the achievements of our social heroes.

Thanam believed in having all the bells and whistles because to her, the awards event was one evening when the hardworking social heroes could dress up for dinner and be honoured in the presence of their peers, guests and VIPs.

I could not help laughing as I visualized her description of the glamourous and prestigious event from her descriptive phrase, “Rambut dua tingkat affair, complete with manicure and makeup!”

IMSHA was privileged to have Tun Abdullah Ahmad Badawi as Patron in 2014 and 2015, and the brand gained further recognition when former Deputy Prime Minister Tun Musa Hitam was Patron for 2016 and 2017.

In 2019, IMSHA achieved yet another major milestone when it was recognised as a Good Practice Sustainable Development Goals (SDG) Award Provider by the United Nations in Malaysia.

When we look back on how far IMSHA has developed over the years, who would have thought that this was an idea hatched by two young men who were passionate about the project to spot, recognise and empower the unsung heroes in Iskandar Malaysia?

Thanks, Thanam and Edey, for your time and effort to rake up your precious memories to share with me the juicy tales and key moments in chronological order, to let me document the story of IMSHA in Book Three of My Johor Stories.

Written and Published by Peggy Loh

There are no comments yet