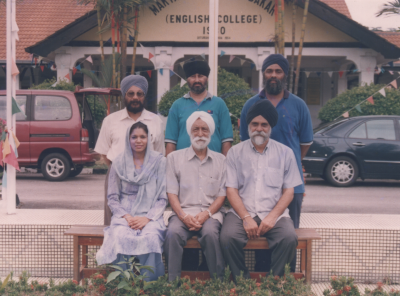 He returned home from work one day and announced to his wife that he was going to build a Punjabi school for the community. At that point, Dato Dr. Bhatal, who was a respectable state surgeon, was already past his retirement age, yet he still wanted to give back to society.

“Are you crazy?” his wife Datin Joginder Kaur or Datin Jo as she is fondly known as responded, fully aware of the amount of work involved in such a project. But even with her skepticism, she knew her husband well: it was in Dato Bhatal’s nature to give his all in his work, as she and her daughter, Susie Bhatal, fondly recall.

Dato Bhatal’s noticed how the children at the Sikh temple – the gurdwara, conversed in either English or Malay only. It concerned him that their mother tongue, Punjabi, was disappearing from the vernacular of the future generation. At 77, an age many would have opted for a life of relaxation, Dato Bhatal was determined to keep the language of his ancestors alive.

For him to reach out to these kids better, he went on to learn how to use a computer, and how to type Punjabi alphabets on it. Susie remembers how her father would work late into the night – arranging texts, translating, and aligning pictures to build worksheets for his future students.

In 2003, the first batch of 50 students joined the new Punjabi Education Centre. Two weeks after that, 100 more applications enrolled in the programme. Dato and his wife recruited six housewives who could speak and write Punjabi, and with Datin Jo’s teaching background, she trained the housewives to teach professionally. The husband and wife team also travelled to Ipoh and Singapore to learn from existing schools there. It was initially difficult to segregate the students, a mix of teenagers and children with different levels of proficiency in the language. To solve this challenge, the students were required to take an entrance test designed by Dato to determine their class placements.

With the support of the Punjabi School headquarters in Ipoh, all teachers eventually received qualified teachers’ certificates, recognised by the Ministry of Education.

Datin Jo recalls Dato’s Bhatal’s commitment to his work. Every Saturday, he was there early to make sure everything was in place, and it was agreed that students whose parents could not pick their children up on time up on time would be ferried by him. Datin Jo was there with him throughout, supporting his endeavours.

Datin Jo emphasises that the success of the school was not up to their efforts alone. It was largely thanks to the support of the community who stepped in and offered to help, be it through monetary donations or by contributing time and energy.

Dato Bhatal was a man with a reputation of being straightforward; in Datin’s words, he would “call a spade a spade”. He was quick-tempered and known to be strict, but he also not one to keep grudges and chose to let things pass quickly. Behind the strict personality, he was also a romantic and was deeply respectful of and in love with his biggest supporter, his wife. The husband and wife team is a testament to the saying that next to every revered and successful man, stands a firm, loving, and strong woman who sticks with him through thick and thin.

In March 2016, aged 91, Dato Bhatal passed on peacefully in the arms of his wife, with his final words being “Jo, I love you”. Although Dato Bhatal is no longer with us, his legacy continues as the Punjabi classes are still held at the English College every Saturday from 2 PM to 6 PM.