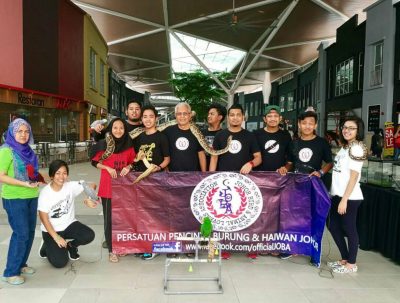 Founder of JOBA, Major Azman, has a house that looks like a mini-zoo, with perhaps more animals than human residents. Birds of various species, turtles, cats, and snakes give the home a feel of paradise for any animal lover. His 2-year-old granddaughter gleefully points at the snakes, unaware that the typical response at the sight of snakes is to shriek. Education, awareness, and care for animals are exactly what JOBA does, and its efforts are a success; as evident by the little girl’s enthusiasm towards the reptile.

Johor Bahru Birds and Animal Lovers Association (JOBA) was formed in 2014 and now has about 60 registered members. Run by animal-lover volunteers, its aim is to educate the public and school students about the animal kingdom. Working closely with the Department of Forestry as their education wing, they have regular exhibitions and visits to schools, hoping that exposure to animals would instill a sense of love for our animal friends. When there is love, there won’t be cruelty, and even better, no intentions of axing animals to death. Proper handling of the animals is taught and the audience also learns about different species of animals and how to care for them. The activities are kept under close supervision to ensure safety for both animals and people.

JOBA is one of the Department of Forestry’s vendors that provides licensed tags for registered birds. It works in partnership with vets for special microchipping of reptiles. Expert care is needed for the microchipping process as the microchip – which is the size of a grain of rice – is injected underneath the reptile’s skin. Licenses are required to keep reptiles and birds as pets and for placing them in exhibitions. JOBA is also working with the Department of Forestry to educate the public on the Wildlife Conservation Act 2010 (Act 716) and the welfare of the country’s animals.

Members of JOBA exchange knowledge by collaborating with specialists on how to care for specific species of animals. The club also serves as a platform for pet owners and animal enthusiasts to voice concerns and discuss animal regulations.

Other than education, JOBA has also conducted a Silent Walk from the Johor Zoo to  Johor Bahru town. The walk was joined by 50 people, silently marching against animal cruelty while carrying banners and signs with pictures of abused animals. Along with other NGOs, a clean-up of the Johor Zoo was also organised. Wild beasts were kept in cages as their human counterparts helped to clean their enclosure. Large round crates were also donated to the zoo as scratching posts for the lions  – after all, lions are just big cats, right?

“We want to educate the public to not be scared of the animals,” said Major Azman, emphasising on love for all beings.