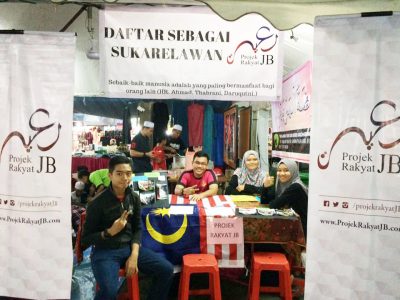 Education is a right that every child regardless of their background deserves, yet access to education is limited when one has financial challenges. The harsh truth of the world is that formal education remains a luxury for the underprivileged.

The lack of money should not be a reason for exclusion from learning in an institution. To see that everyone has a right to education, Projek Rakyat JB kicked off in 2014 to focus on the educational needs of the underprivileged, especially the orphans. To aid the development of their initiative, the team behind Projek Rakyat JB took up mentorship and guidance from Projek Iqra, a more experienced KL-based charity education programme.

Classes are conducted in homes or in public halls by volunteers; of which there are about 200 of them – mostly university students who have been with the Projek Rakyat JB team since the inception of the initiative’s activities and events. There are even volunteers all the way from Batu Pahat, Simpang Renggam, Muar, and Singapore who contribute their time and energy for the children.

In 2015 and 2016, Projek Rakyat JB took up a mission of making Hari Raya more colourful for 120 students from low-income backgrounds via a campaign called Projek Shopping Raya. The programme successfully put smiles on the children’s faces as they were able to feel the excitement of shopping for their own Hari Raya clothes.

To Amirul Aslam, Project Champion and President of Projek Rakyat JB, seeing the children’s happiness is a priceless experience. He also shared how their literacy programme, Jom Baca, gives the volunteers a sense of accomplishment when they teach children how to read. Literacy is the first step to opening doors to more learning and education. It is his personal satisfaction knowing he has given the children the tool that they will later use to thrive in this world.