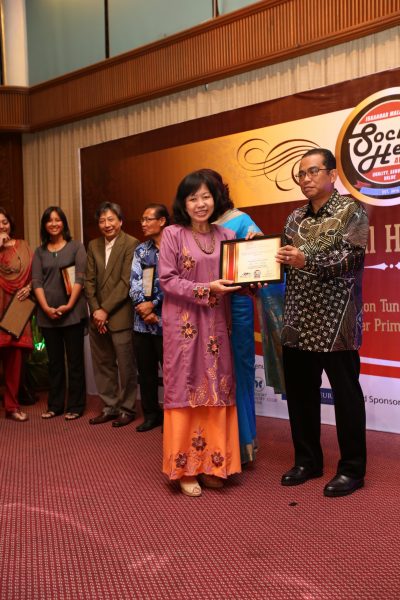 Early one morning, as Sow Pheng and her son were about to leave their house, she suddenly felt like something wasn’t right. When she stepped out of her house, she noticed two men on a motorbike pass by. The next thing she knew, the sounds of the motorbike died off, only to hear it approach again back in her direction. She immediately knew something was amiss and dashed back into the house with her son just in time and locked the door. The two men rushed into her porch wielding parangs and managed to steal her handbag which she had left behind in her car.

Sow Pheng is forever grateful to her “sixth sense” in that situation, an intuition she believes to be more prominent in women. She often recounts her incident to others as a lesson for everyone to be more aware of their surroundings, especially for youths who have their eyes glued to their phone screens and ears jammed with earpieces. With two out of five senses busily engaged with something else, how can one be certain to remain alert and safe?

To address this potential safety concern, Sow Pheng, a retired school principal, has helped organise many Safety Workshops for young girls and women on how to avoid becoming a victim on the streets, at the workplace, and even in the house. The workshops cover topics such as safeguarding techniques, where participants are reminded to “use common sense” and avoid risky areas known for dangerous situations. Should anyone find themselves victimised, participants are also taught to release themselves from an attacker’s grip, how to escape without brute force and many other important lessons on flight or fight measures.

Sow Pheng’s inspiration and determination to help others comes from her mother who received little education but learned to read on her own and, through hardships and challenges, made sure her daughter was educated and graduated from the university.

“She displayed the strength and agility that women have. When we empower women, we can empower a nation. Therefore,  if we can support and lift the other, we can propel each other forward on the road to gender equality,” Sow Pheng said.

“Being involved in community work has made me more understanding of the role we can play in answering the many needs of others and not just fulfilling our own.”

In 2017, Sow Pheng received the Tokoh Guru Award from the Johor Bahru Education Department for outstanding service and contribution in education, for her efforts in collaborating with schools and the district education office in community education programmes. She is also leading an NGO called Johor Peace Committee, organising programmes that promote peace and harmony.

Building a peaceful future and educating harmonious values is how she has been spending her retirement. Sow Pheng is happy and grateful to have the continuous support of family and friends in her social work efforts.